Greetings to all Friends of Die Oog

The good winter and spring rains during the second half of 2021 were welcomed by the local inhabitants down at Die Oog. The weavers, Egyptian Geese, Spotted Thick-Knees and Coots all had hatchlings and the Western Leopard Toads returned to breed after avoiding Die Oog during 2020.

Weavers preparing their nests during September, Thick-knee and Egyptian Geese chicks with their parents around end October/early November. Thank you to James Human and John Rayner for these lovely photos.

Western Leopard Toad breeding season migrations typically fall between late July and early September, timed with the arrival of the first post-winter warm weather. We were happy to find them heading back to Die Oog, calling (snoring chorus) around the weekend of the 11-13 September 2021. 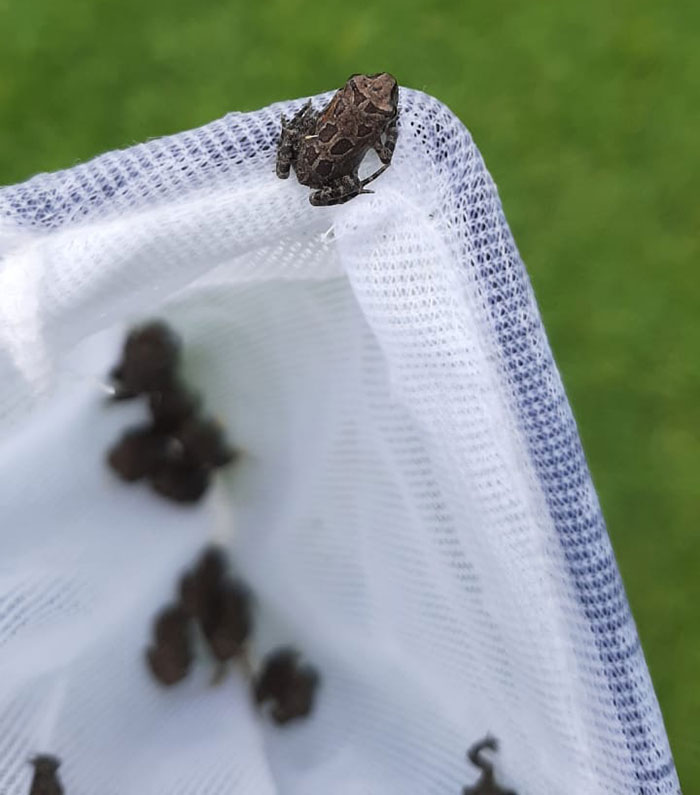 Typical breeding sites for Western Leopard Toads have standing open water >50 cm deep, with scattered patches of aquatic plants and beds of emergent vegetation such as bulrushes Typha capensis. Calling is most intense at night but is heard during the day as well. The males have a habit of calling from a floating position with limbs outstretched.

Its deep, pulsed snore continues for about a second and is repeated every three to four seconds, distinguishes the Western Leopard Toads from all other sympatric toad species. You can hear their calls on this link to a video clip on our Facebook page, or view below.

Thousands of toadlets came out during the first week of November 2021, as witnessed by neighbours living nearby Die Oog.

Water levels recovered nicely with the good winter rains, and we were able to measure the highest level in a few years – around 1.8m – by early October 2021. Since then, water levels have dropped somewhat throughout the summer months.

The welcomed response from the Western Leopard Toads perhaps reflects adequate water quality for them to breed and survive so we’ve been mentoring water test results as obtained by the City Council on the monthly basis.

Un-Ionised Ammonia is calculated using measurable soluble ammonia, temperature, pH and conductivity values so it is representative of overall water quality. Target water quality range for un-ionised ammonia is less than or equal to 0.007 mg/l. On the chart you can see that we’ve transitioned the column colour to red when readings went the acceptable level of 0.007 mg/l. This during the time (end of summer into Autumn) when water levels were dropping rapidly at Die Oog. While water levels were near empty in May the water quality reading did not appear to be out of quality range, so we might assume that the sample was collected just after some rain perhaps? Temperature and pH are plotted on this chart as lines with readings on the secondary y-axis. The lines are coloured red when readings start to reach levels that are not ideal for aquatic life.

We expect that we might have had an early breeding season in July and a full breeding season for the Western Leopard Toads in September. The water quality sampling shows that water chemistry at Die Oog was optimal during these times, timed with a temperature increase and water levels having risen by over a meter during the winter months. 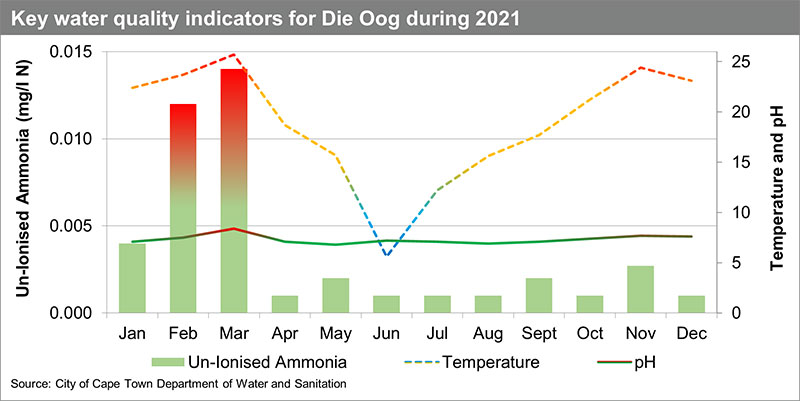 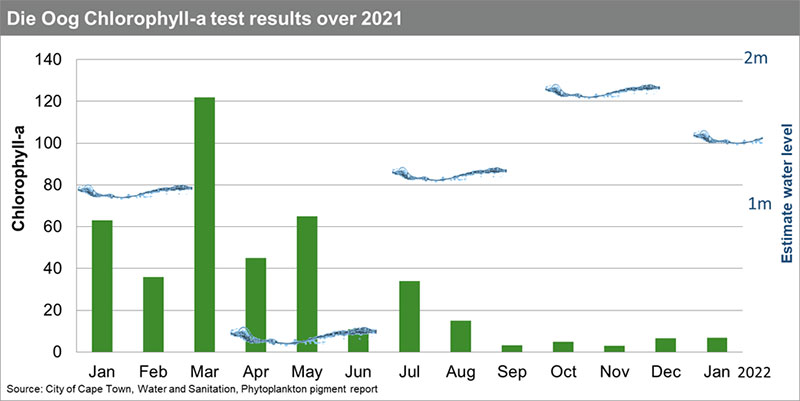 Chlorophyll readings can vary with sample location, but what is interesting to note is that while the Chlorophyll levels from sampling at Die Oog were over the acceptable South African water quality guidelines (>30 µg/l) from January 2021 until June 2021, levels were well within recreational levels around July when we may have welcomed the first return of the Western Leopard Toad breeding season at Die Oog.

Chlorophyll-a levels continued to drop with the good winter rains, reading below 5 µg/l during October 2021, and as of the January 2022 sampling, still below 10 µg/l.  Vastly different (10%) to the reading last January which was just over 60 µg/l. Of course, sampling results may be dependent on where exactly the sample was collected within the water body at Die Oog, but a positive sign, nonetheless.

We would expect readings to increased again as evaporation intensifies with the hot dry and winter summer days of 2022, but it’s a good start to the year after several years of drought (2016-2019) that really impacted the shallow water body at Die Oog.

The council is trying to manage overgrowth of Typha at Die Oog. A representative has come to inspect the extent of the weed, and we’ve been informed that they plan to send a team to clear it away as water levels subside in the coming months. 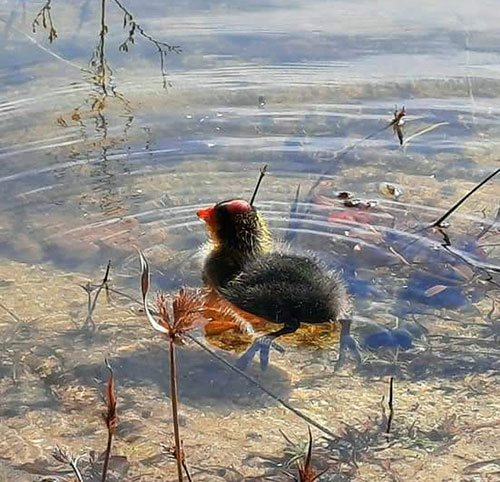 With the good rains received last winter we also saw a beautiful array of fungi and lichen.

Thank you to John Rayner for these spectacular photographs 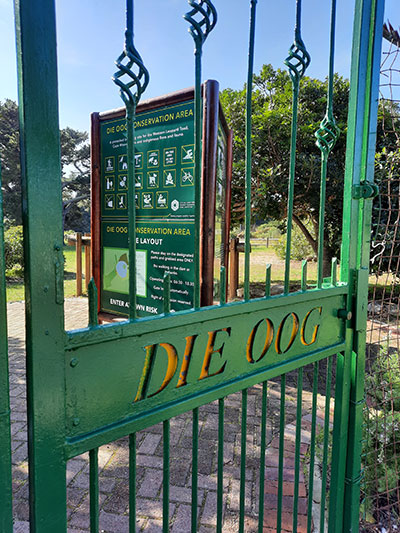 An important aspect of our role as FODO is to engage with the city council and relevant organizations like WESSA for the overall maintenance and improvement of our beautiful City. In terms of security and maintenance, the electronic striker for the entrance gate was fixed in June 2021 and the council returned to paint the gate and clear the overgrowth along the paths around Die Oog during November. The gate locking mechanism unfortunately faulted again in September and has continued to be an issue. We hope to have this fixed soon.

We kindly urge all visitors to please respect the space as a natural sanctuary free from littering and vandalism.

For those who have not yet renewed their membership for the small sum of R50, please will you do so as we rely heavily on your subscriptions and donations. And please feel free to extend an invite to your families and friends who may like to join as well.

Please click on this link for membership renewal or donations.

Considering Covid-19 safety, we were unfortunately unable to hold an annual AGM at the end of 2021, but information is available on request

From all of us on the Friends of Die Oog committee, may you and your loved ones have a blessed and healthy year ahead.