The good autumn and winter rains were welcomed by the local inhabitants down at Die Oog. Water levels rose to near to what they were during October last year. The spotted thick-knees (Dikkop) appear to be happy, the weavers have been very busy building nests throughout the month of September and October, Egyptian geese and coots have been teaching their fledglings to forage, and a new chick joined the growing coot family this past week.

Save the Date – Die Oog AGM 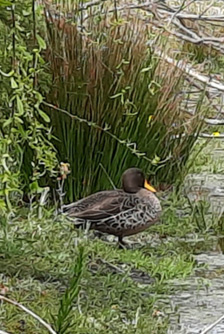 A pair of Yellow Billed Ducks even returned to visit Die Oog earlier this month. The Yellow Billed Ducks left Die Oog during the drought, so we’re really hoping that they return to stay. The coots and Egyptian Geese are unfortunately not being the most gracious hosts. They appear to be more territorial as they watch over their chicks.

Another welcome visit was our Ward committee on the 20 September. They held the Ward 73 Meeting at Die Oog and were given a tour of the wetland by the Environmental Sector committee member, Roger Graham.

The council’s clearing of the overgrowth on the pond from the end of May into the first week of July was a great effort and reflective of a substantial increase in dissolved oxygen within the water column, which can be seen on the chart below.

The team from the council hopes to return to do some more clearing work, but this will have to wait until the Western Leopard Toad breeding season is over and the toadlets have migrated away from the pond. Follow up cleaning work will therefore likely proceed sometime during the first quarter of 2023.

The clearing of the invasive weeds and good rains that followed immediately have enhanced the water quality by improving oxygen levels and decreasing Chlorophyll levels in the pond. 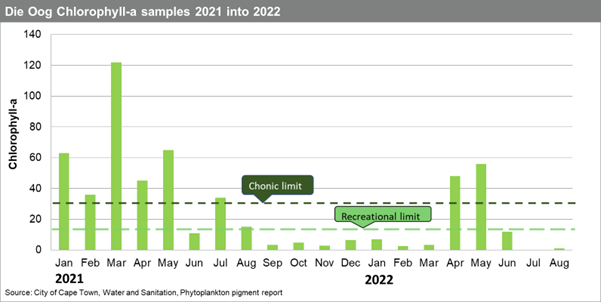 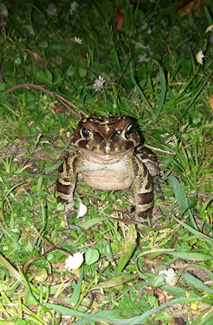 Western Leopard Toad migrations for what is termed an “explosive” (short lived) breeding season are timed with a temperature increase and rising water levels as we emerge from the winter months. The Toads returned one week to the day (8-12 September) that they arrived at Die Oog to breed last year, this year calling out in chorus for 4 days before returning to the bush and leaving strings of eggs in the water. Interestingly, the timing also aligned with the full moon around the 10th September.

The welcomed response from the Western Leopard Toads perhaps reflects adequate water quality for them to breed and survive so we’ve been monitoring monthly water sampling results as obtained by the City Council.

Oxygen levels, water temperature and pH are relatively reliable indicators of water quality and are plotted together on the chart below. The lines are coloured red when readings reach unfavorable levels for aquatic life or yellow where pH starts to drop too low.

The water quality sampling shows that water chemistry at Die Oog was optimal for the Western Leopard Toads as we came out of the drought in 2019 and again in 2021 and this year, while a low pH may have been one of the factors that inhibited the breeding season for 2020.  In 2020 the typical breeding season (late August into September) passed without any activity. Some males were heard calling (snoring chorus sound) later in October, but no toadlets were reported to have migrated from Die Oog later in 2020. 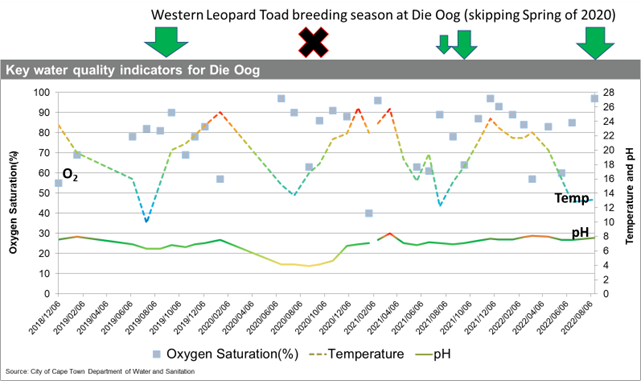 An important aspect of our role as Friends of Die Oog (FODO) is to engage with the city council and relevant organizations like WESSA for the overall maintenance and improvement of our beautiful City.

Positive work by the council includes the creation of fire breaks which have been cleared between Die Oog and the surrounding neighbours. More clearing is expected to be done once the leopard toads have migrated away from Die Oog.

An area where we’re unfortunately still awaiting action is the entrance gate automation. FODO committee members have had to open and lock the gate every day since it faulted in September 2021, after being repaired just a few weeks before in the winter of 2021. We have been communicating with the council and stressing the urgency of this matter. We have been told that we’ll receive a quote for this work sometime early in November.

Another positive, is that the council now have 3 EPWP workers who will be responsible for Princess Vlei, Meadowridge Common and Die Oog. They are hoping to employ another 3 soon, so that each area can receive more regular attention for clearing and maintenance.

A longstanding problem is the sewerage lines in Lake View Road. Incidents of blockages in the main sewer line have been an issue for over a decade and they are becoming more frequent. The severity of these blockages is also increasing, with residents neighboring Die Oog reporting overflows into their gardens and ultimately into Die Oog. This is a very serious matter and we have raised it with the council.

The council has made water chemistry and quality data available on their website. An initiative brought forward recently by the Mayor of Cape Town to make information more transparent and available to the public. It covers all inland and coastal water bodies so there is a substantial database that is accessible via this link: https://odp-cctegis.opendata.arcgis.com/documents/inland-water-quality/about.

Included in the data provided is sampling for E.coli which is an health indicator of sewage pollution. We were able to filter the data to Die Oog and the results support reports made by neighbours who have unfortunately been fraught with sewage pipe failure problems for a number of years.

Most concerning is that dangerously high levels of E.coli have become more frequent and more elevated this year. This is particularly evident in months when water levels are lowest (March to May) following sewage pipe issues in Lake Road.

The chart below shows E.coli levels within the water column at Die Oog, and the arrows highlight the times when levels reached slight risk (1000-4000 Orange) and high risk (>4000 Red). Anything below 1000 is considered very low risk of gastrointestinal illness. Years are coloured to show years when the risk was considered low and more recent years when the risk of E.coli infection has elevated.

Red points along the base of the chart indicate when neighbours reported sewer blockages near to Die Oog, and the red points floating in the chart highlight times when sewage overflows where reported adjacent to Die Oog.

We are planning our fist AGM since the start of the pandemic, in the first quarter of 2023. A family friendly gathering under the large pine trees at Die Oog on Saturday morning – 4 March 2023 has been set. Hotdogs and cooldrinks will be sold to raise funds for Die Oog.

More will be announced as plans come together, but please save the provisional date as it is sure to be a lovely morning for all.

Save the Date – Die Oog AGM

For those who have not yet renewed their membership, we have kept the small amount of R50 for years but need to increase it to R100 per year from the new financial year starting February 2023.

We have received a wonderful response in July, thank you for the renewals that have come in, coupled with some generous donations. If you haven’t yet renewed, please consider renewing – at the 2022 cost of R50 per family but any additional donation will go a long way to help us cover rising costs of maintenance and ensure that we are able to keep our gardener employed on a regular basis.

We rely heavily on your subscriptions and donations, so please feel free to extend an invite to your families and friends who may like to join as well.  Please click on this link for membership renewal or donations.

From all of us on the Friends of Die Oog committee, may you and your loved ones have a blessed and healthy year end. 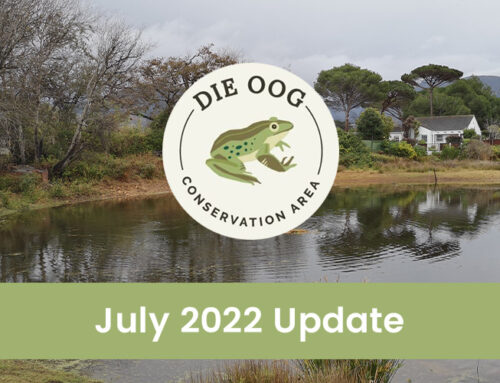 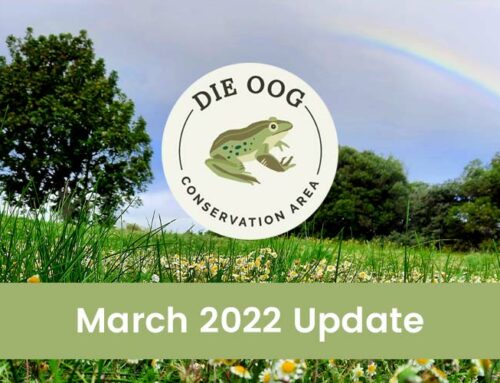 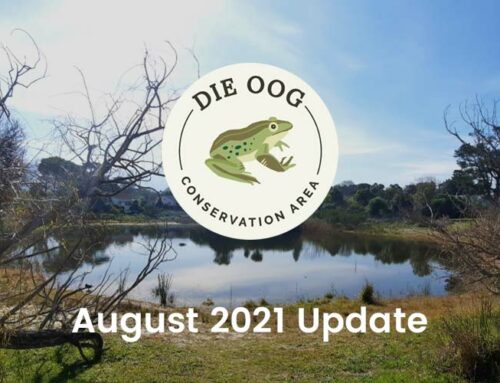 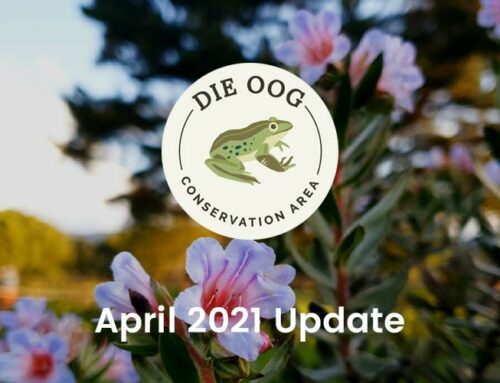 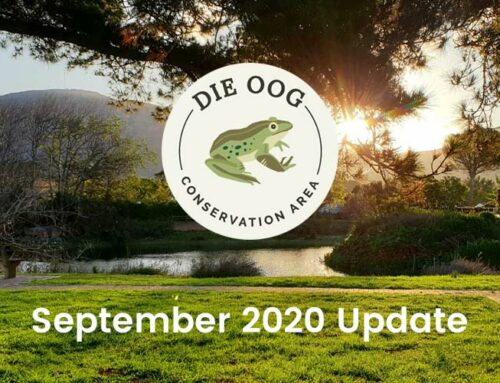 SAVE THE DATE! Die Oog AGM: 10.30 am Saturday 4 March 2023 at Die Oog
Learn more
This is default text for notification bar
Learn more